Basic Theory of the Acetate Path (1) — Some Background

Before discussing the actual lab work itself, I think it wise to first talk a bit about the basic history of the Acetate Path, particularly its most recent history. This will help a good deal to put the information I will provide in the next few essays in to context.

We should first be aware that the method of making the Philosopher's Stone which we call today the Acetate Path, was originally called 'The Work of Saturn' (Opus Saturni), and 'The Path of the Vegetable Stone'. This last name can be a bit confusing, because in modern alchemy we are taught that the vegetable stone is somnething made from plant material. But we will see, as these next essays unfold, that there is a good and interesting reason why this name was also used, at one time, for one of the ways to make the Philosopher's Stone.

The earliest record we have of this work is in the writings of Zosimos of Panopolis [circa 300AD]. Zosimos quotes Mary the Jewess [circa 200AD] where she cryptically describes the basics of The Path of Saturn. Pieces of what she had to say are quoted in the well known book 'The Rosie Crucian Secrets' (Anon), in reference to the description that book gives of the Acetate Path.

During the Renaissance period it could be argued that the Path of Saturn was the most widely written about, and practiced, of all Paths to the Stone. A number of the earliest and most secretive European Rosicrucian Brotherhoods left rare manuscript descriptions of their researches into this Path. During the late medieval period and the Renaissance we see it explained in the works of alchemists such as Paracelsus, Ripley, The Black Monk, Hollandus, Arnold of Villa Nova, and Parisinus. Even though we know the origins of this Path stretch back before the dawn of Christianity, it is Ramon Lully [circa 1260], who we today recognise as the most immediate father of this Path, for two reasons: because he is usually the oldest source quoted by the old Adepts of this Path, and because the language and techniques specific to this Path originate historically, most often, with Lull.

At the end of the 1600's, when the dawn of modern science arrived, alchemy went underground. Toward the end of the 1600's and on in to the 1700's we see less and less public written material on this Path (and on alchemy in general), and an increasing amount of the surviving literature during this period comes from secret documents passed down within a few rare and serious esoteric organisations which still held the old mysteries.

Accurate information about alchemy in general, and about the Acetate Path specifically, almost entirely dissapeared from the public view by the 1800's. If we look at the records of the many Western esoteric schools that sprung up in the 1800's, we find only a few references to alchemy, and almost all of those references are strictly superficial, and often full of errors and complete misunderstanding. For example, by 1888, when the Hermetic Order of the Golden Dawn, the most serious and influential esoteric Order in modern times, was created, it contained virtually no instruction on the subject of alchemy. This provides us with evidence that the most serious occultists in Europe during the closing decades of the 19th century had almost no contact with the accurate and authentic alchemical tradition.

Thus, it is important to be aware that as the 20th century began, the true alchemical tradition was all but extinct in the Western esoteric tradition. The alchemical knowledge, and scene, we enjoy today is almost entirely due to a revival that occured in the early 1960's. That revival can be attributed to one individual, almost completely; a man who we know today as Frater Albertus (aka: Albert Riedel).

Frater Albertus had been a member of AMORC (The Ancient and Mystical Order Rosae Crucis), up until the the early 1960s. He had been a senior instructor in alchemy within that Fraternity, but had argued with its then Grand Master (Lewis Spence), about the role of lab alchemy instruction in AMORC. AMORC had been one of the few mainstream esoteric schools to have access to reliable alchemical teaching, but Spence had decided to 'tone down' the teaching of alchemy. In fact, that kind of training had almost been phased out, and this had got Albertus concerned. Eventually Albertus and Spence fell-out over an argument about alchemical training, whereupon Albertus made it clear … “if AMORC won't teach alchemy, I will go and found my own school, and teach it myself”.

In this way, in the early 60's, Albertus founded his school, which he originally called The Paracelsus Research Society (PRS). It is from this small beginning, in the early 60's, that the bulk of what we know today about Western Alchemy can be sourced. Before the PRS few people, even in esoteric circles, had any real idea about lab alchemy. But by the end of the 1960's, due to Albertus' teaching of the lab tradition, which he had inherited, to anyone who wanted to attend his classes, by the end of the 1960's an entirely new stream of alchemical understanding had been born.

By 1969, when my own teacher first met Albertus, he had a well established lab and student dormitory at his home in Utah. He was teaching lab alchemy in a seven-year (seven class) system, and the PRS was now known as the Paracelsus College. Albertus was not only teaching in Utah, to stuidents who came to him from all over the world, but he taught classes in Europe, Australia and New Zealand (among other places). It was when he first came to New Zealand in 1969 that my teacher first met him. The woman who had been assigned to be Albertus' aide de camp while here, had become ill, and the woman who would eventually become my teacher was asked to step in. So for the time Albertus was in New Zealand my teacher had been at his side the entire time, taking the prima and secunda clases here, and then travelling to Utah for the 4th, 5th, 6th and 7th year classes annually, until she graduated in 1978.

During her time at Paracelsus College she had become close friends with Albertus and his wife, and had met a number of other well known Western occultists, such as Israel Regardie, at the yearly classes. Regardie, through his training with Albertus, played an important role in awakening an awareness of the true lab tradition in the Golden Dawn system, an legacy which is still developing today in the less public avenues of that Order.

Another important figure who was quietly milling around on the edge of Albertus' lab training at that time was a French gentleman by the name of Jean Dubuis. As it turned out Dubuis had a knack for the lab work. So much so that he took what he had learned from Albertus and founded his own school in France. That school was known as Les Philosophes de la Nature (LPN), and in that organisation Dubuis took the basic foundation which Albertus had laid, and developed it into the most extensive and comprenensive public lab alchemy training we know of today. Then, in the late 80's or early 90's (I'm not sure of the details), Dubuis made a connection with some avid alchemists in the USA, and through them an English language branch of Les Philosophes de la Nature was created, which was known as The Philosophers of Nature (PON).

I began my training (1988) with my teacher ten years after she graduated the seventh year class at Paracelsus College. We both became involved with the PON in the early-to-mid 90's, becoming the agents for the distribution of the PON study course in Oceania. So my own training was very much a combination of Albertus' school and the PON take on Albertus' teachings. 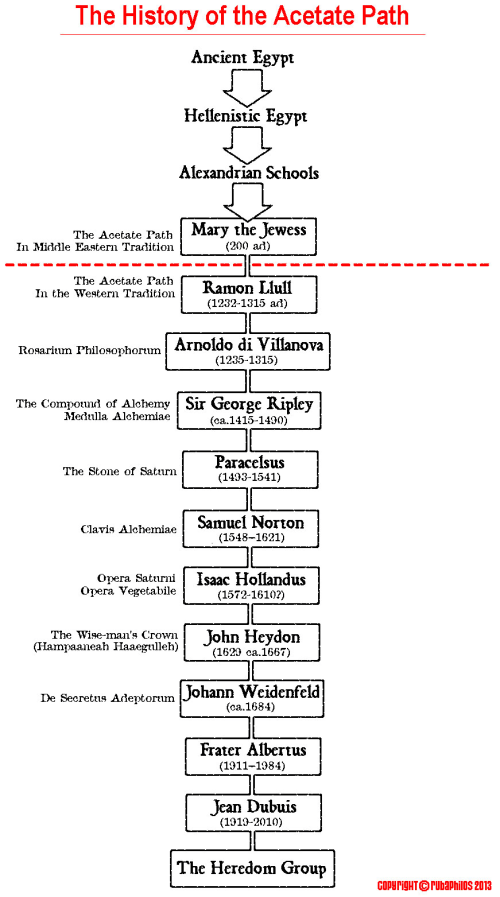 So how is this all related to the Acetate Path?

One of the important things about Albertus' advanced teaching, on his seven year training course, was that it culminated in instruction in the Acetate Work. It would be safe to say that not only was Albertus almost single handedly responsible for re-birthing the lab tradition in our time, but a huge part of that revived teaching was a knowledge of the basics of the Acetate Path. So we can say that a good number of Albertus' advanced students were all familiar with Albertus' teachings on the Acetate Work.

Jean Dubuis had also become fascinated with the Acetate Work, but due to the fact that Dubuis was French, and therefore had a big attraction to the Franco-European tradition, he was personally very keen to succeed in the so-called Flamel Path. So PON's literature, and the private discussions which travelled around the PON grapevine, focused heavily on both the Acetate Path and the Flamel Work. It is ironic to note that Dubuis was quite outspoken about his strong doubts that the Acetate Path could be a success, and encouraged himself and others to put their hopes in the Flamel Work. But in the late 90's Dubuis admitted, publically, in a pseudo-documentary he made with Russ House, on the Acetate Work, that he had succeeded in producing the White Stone by the Acetate Process … and performed a number of transmutations of base metal into white noble metals.

Apart from a few very rare source works from 17th, 18th and 19th century manuscripts, mainly out of French and German secret societies, almost everything we know of today about the Acetate Path (in its details) comes first from Albertus, then was developed by Dubuis. It would even be safe to say that without Albertus and Dubuis we would probably know next to nothing about the alchemical use of acetates today. This is so much the case, and so recent, that less than eight years ago when I started openly attempting to discuss Acetate Alchemy on email forums, only a small handful of people watching had any idea about what I was talking about. At the same time, a good number of students of alchemy from Europe had never even heard of the Acetate Path, and argued aggressively that the entire idea was a modern invention, and complete rubbish. It was a very curious situation.

With all of this in mind, we should be aware that even though Albertus and Dubuis had a lot to say about the Acetate Path, what they said (in public) was almost entirely restricted to lab procedure, and to only the first stage of the work, up to the Dry Distillation. Almost no one has added to that body of knowledge in modern times, which has left nearly two-thirds of the Acetate work unexplained in modern literature, and undiscussed on various public forums.

Albertus and Dubuis were almost entirely silent about the history of the Acetate Work, and about its most serious literature. So while these men were responsible for awakening our attention to this Work, they did so by saying as little as possible.

What this means is that about seventy percent of what I am going to explain in the coming essays has never been heard of by modern students of this Path. Even though, you will notice, it can be found in a number of accessible texts. Here, in the coming essays you are going to read the most comprehensive description of the entire Acetate Path, not only its lab aspect, but also its history, philosophy and some of its chemistry.

This essay was first published on the Hermetic Alchemy Forum on 7 October 2013, as post #416.