Thus far we have recombined the acetone soluable Sulphur with the acetone to produce the Alkahest. Then we have used this Alkahest to dissolve the fixt Salt of Sulphur, which Ripley calls the Element of Earth, to produce Philosophic Mercury. This now leaves us with the last two products of the original destructive distillation to integrate into our Stone … the Salt called 'Mars' and the water soluble portion of the Sulphur, which Ripley calls the Element of Fire.

The next step Ripley describes in the 17th Chapter of the Bosome Book, which he titles 'The Work of Putrifaction', and I quote:

“When all your Elements be thus separated, then take the white Calcined Feces first of all reserved, called Mars, and put so much thereof into a Chymia as will scarcely fill half the Glass, and thereupon pour so much of our Ardent Water rectified as may but well cover the Calx which done incontinent stop close the Glass with a Blind-head, and set it into a cold place, until the Calx have drank up all the Liquor, which it will do in 8 days, then imbibe it again with the like quantity of the same Water and let it stand eight days more, and so Reiterate the work, from 8 days to 8 days, until the same Calx will drink no more; but stand Liquid still, then Seal up the Glass with a Hermes seal and set it in Balneo Mariae in a temperate heat to Putrifaction.”

Ripley begins here by taking the pure Salt (Mars) I spoke of previously and places it into a chymia (small long-necked flask) with some of the pure acetone (ardent water). The flask is sealed air-tight and its contents left to macerate in the cold. We are told that in eight days the Salt will absorb all of the ardent water. We are instructed to keep adding more ardent water until after a series of eight-day periods of imbibing the Salt is now saturated with the acetone, and cannot take any more.

Next we are instructed to take this saturated Salt and digest it in Balneo (in a water bath) at about 30 degrees Celsius (the heat of putrefaction). In the 18th Chapter (“The Digestion of the White Stone”) Ripley explains the next part of this stage:

“Then in that temperate Balneo let your Glass stand unremoved by the space of fully 150 days, and until the Stone within the Glass become first Russet, and after whitish green, and after that very white like unto the Eyes of Fishes, which then is Sulphur of Nature flowing, and not evaporating in Fire, and our white Stone ready to be firmented.”

This putrefaction must be continued 150 days (almost six months). During this time the snow white Martian Salt begins to turn russet brown. (See pictures below.) Those pictures were taken in 2002, when digital photography was still in its infancy, so the quality is poor. But they show relatively clearly the evolution of the russet stage of the putrefaction of the White Stone. Toward the end of the russet stage the mass turns white-green (just as Ripley describes). In the bottom right of the 4 pictures below, you can see what happens if the heat is raised too high during that stage. The result is a vitrified green mass. The 'Stone', but stopped in its tracks at an immature part of its progress. 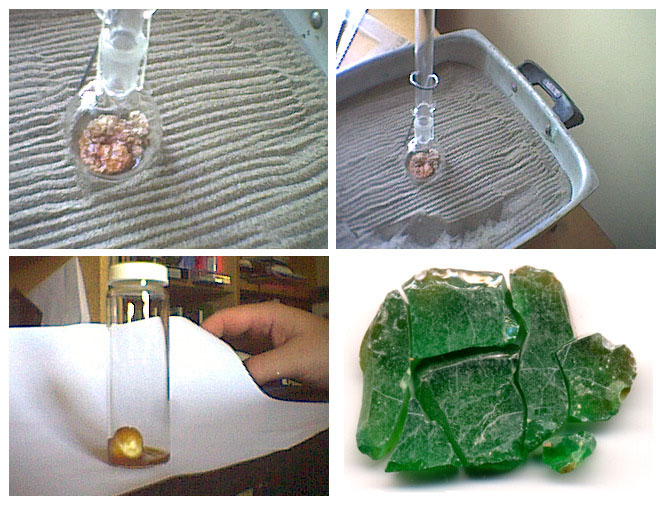 Ripley does us another service by pointing out that the final point in this White stage the matter is referred to as 'Sulphur of Nature' … another important concept nailed down. He also tells us that this mass is now so soft and volatile that under heat it 'flows' (not unlike wax) our 'Sal-Fluere' ;) … which explains why when I made the mistake eleven years ago (at my first serious attempt at this work) of raising the heat just a degree too far, the mass flowed and vitrified at the wrong point. Its not hard to imagine, if I had managed the heat more carefully, and the Nature Sulphur had evolved to its final 'white', what you would be seeing there in that picture would not be a green 'Stone' but a Red one.

Now we have our 'White Stone' (the alchemical Queen), ready to be imprinted (receive its ferment) either to the White or the Red, in order to transmute base metals either to noble white metals, or to gold, respectively.

This essay was first published on the Hermetic Alchemy Forum on 18 December 2013, as post #538.