Once the four primary products of the destructive distillation are separated one from the other, and contained, we are at the end of THE FIRST WORK which is SEPARATION.

Now we begin the SECOND WORK which is PURIFICATION of these four substances.

Ripley kind of confuses this clear division of the first and second works by describing the separation steps mixed up with the first steps of purifying the four substances. As I have mentioned earlier everything up to this point in the work is reasonably well understood. From here some of the pieces of the next steps are well understood too … but there is some confusion caused between that which we might call the 'Albertus' approach and the 'Ripleian' approach to labeling the products of the destructive distillation, and with how to deal with them.

Many of us have worked the alchemical plant process which Frater Albertus designed and made famous as the fundamental approach to dealing alchemically with plant matter. Today this work is often called the 'plant simple' process, and many novices work at producing seven tinctures from plants by this process, one plant attributed to each of the old planetary forces. What many students of alchemy don't realise, though, is that in learning this process they are really accepting a very particular philosophy about alchemy, which was quite specific to Frater Albertus, and is hard to find anywhere else in alchemical literature before his time.

If we look at the following diagram, on the left side we can see roughly the scheme Albertus was teaching: 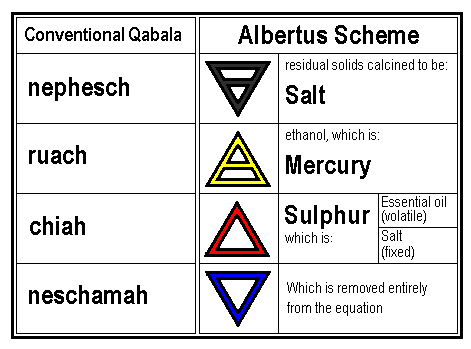 In his work we manipulate four substances, and we can see how these four substances can be referred to as being the Elements of alchemical philosophy, but also as the three Principals. Since I originally I produced this diagram for one of my students I have also included a list of attributes of the Qabalistic Partzufim (archetypes), showing how a system such as the Hermetic Order of the Golden Dawn would connect the primary Qabalistic archetypes to the Elements. Anyone sufficiently familiar with Qabala will immediately recognise how that works. I included this for my student because, naturally, our discussion involves a constant comparison between outer lab practices and ideas with inner psychological practices and ideas. I'm not going to elaborate on the inner side here, since our focus is on the Acetate Path itself. But if anyone is curious, please ask, and I will explain, because anyone who is adequately familiar enough with these ideas will recognise some curious differences between the partzufim attributes in the conventional system to the alternative view I teach to my students.

In the next diagram, we see Ripley's attributes of Elements to substances, and there is a major difference in his system, which throws some light on a very important secret which Albertus' system does not: 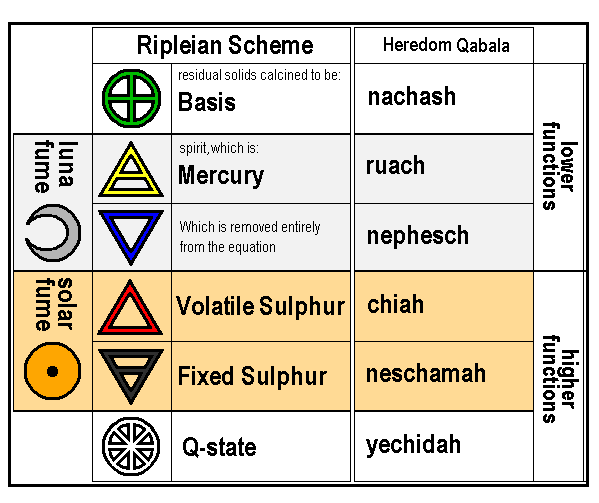 On the right side of the diagram we see Ripley's attributes of Elements to substances, and there is a major difference in his system, which throws some light on a very important secret which Albertus' system does not. We need to understand these differences as we start in to the PURIFICATION phase of the work, because I believe the confusion that can be had here is responsible for a lot of the fumbling and inability to get past the purification phase, that most people working this process experience.

Ripley does not attribute 'Earth' (Element) and therefore 'Salt' (Principal) to the residual solid left behind in the boiling flask. He calls this substance simply 'Our Basis' and 'The Black Dragon'. And he talks about it from this point on as if it plays a role outside of the Elements and Principals … almost as if it is (to use an old analogy) a field in which the Elements are sown, to germinate. Indeed, our foliated earth.

Now let's look at how the four products are purified.

This substance is simply carbon and Lead. The preferred way of starting to purify this was first to powder the residue, spread it as a thin layer on an iron or cermaic plate and drop a hot coal at one edge. The carbon would take light and burn like embers spreading across the black powder, calcining the Lead as it goes, turning the Lead again into a number of its oxides. So instead of that black residue we have now a rainbow coloured powder. Most Acetate Path alchemists will now take part of this and redissolve it in acetic, and by this way make more gum of sericon to work with. Basically, recycling the residue.

Another portion of this oxide they would describe as being calcined to a white salt in a reverbatory furnace. By this means, they tell us, when we have a snow white salt out of this rainbow coloured Lead oxide, we now have 'our basis' pure. we see later that Ripley gives us an important piece of information in that he labels this pure saline substance 'Sulphur of Nature'.

But anyone who has tried this will know that the description of this reverbatory calcination is made to look simple, but is far, far, from being so. If in fact it is possible to produce a snow white salt by reverberation alone, it takes a huge amount of energy (very high temp), and a long time. So this very common description of how to purify this salt is really a blind. It is really designed to stump the novice, and cause him to give up simply because he either can't afford the cost and time of calcining the residue, or to give up out of frustration of not being able to attain a pure enough product.

There are a couple of very rare instances, in classic literature, though, that point out to us that in fact those who were 'adept', knew other secret ways of pushing this salt to its required snow white state, with a minimal effort and expense.

Next, we need to purify the Mercury/Air, which is the acetone. The method is simple enough, and is not much more difficult than purifying ethanol. The acetone is simply distilled seven times. There is a problem here though, in that the more pure the acetone gets, the more highly volatile it gets. By the fourth distillation it will be so volatile that if you remove the receiver from you distillation train, and leave it open for a few minutes, most of the acetone will evaporate. By the seventh distillation it is so volatile it will boil at 30oC, which means if you pour a little in the palm of your hand it will literally boil in your hand. (This is our menstruum which … “does not wet the hands”). So a special distillation system has to be devised that will allow the seven distillations without exposing the distillate to the open air. Then the final product has to be transferred to its storage jar similarly, and sealed Hermetically, so that 'Our Eagle' does not take to the air and escape.

Finally there is the Sulphur. This is the most curious part to purify, and the most complicated.

When we have the entire complex distillate right after the destructive distillation, we first remove the acetone by careful distillation in balneo.

Then we remove the Water (Flood) by distillation, in balneo, too.

This leaves us with a sticky black tar-like oil as a residue in the bottom of the boiling flask. This is a mixture of both volatile Sulphur and Fixt Sulphur (Ripley's Elemental Earth).

Assuring this tar-like substance is dry (free from Water) we now take our 7x purified Mercury (our Ardent Water purified) and pour it onto the tar-like substance. The acetone will dissolve the most volatile portion of the Sulphur, and we can then decant that tincture and save it sealed up. This process might need to be repeated until the acetone won't tincture any more.

Then we now add back our Flood, and digest it on the tar. This Water will now draw-off the water-soluable part of the Sulphur. The Water can be likewise decanted and stored. We will now have left as a residue, the fixt part of the Sulphur, which we will now reverberate till it is a snow white Salt.

Ripley speaks sparingly about this Salt, and he doesn't tell us what its real name is, but anyone who has 'eyes to see' what is really going on in the steps after this essay will realise this Salt is in fact the 'Secret Fire' of the alchemists. The 'Ignis Sapientum'. Without this Fire being collected and prepared properly, nothing past this point will work at all … and the novice student will believe that all of the punch has been taken out of his work, and an impenetrable stone wall has been reached.

In all the years I have read about the Acetate Path, discussed it with people, and taught the process, I have recognised less than half a dozen people (outside of the group I teach in) who had any accurate idea at all of how to get beyond this point. Accurate descriptions of what happens past this point are extremely rare in classic alchemical literature, and most Acetate Path alchemists had no idea of where to find those references until I started mentioning them online about ten years ago. I have never seen anyone discuss what is ahead with any even remotely realistic idea of what is required.

So from this point in my essays we literally enter in to the unknown (for those not communicating with someone who already knows). Where ideas most students of alchemy are far to shy to attempt talking about in public … and a number of the most serious secrets whispered about … now become obvious to those who understand the concepts and practices involved.

We now have a pure 'basis' [Foliated Earth]

And a pure Salt (as the fixt part of sulphur) [Earth]

The Water is now discarded [Water]

This essay was first published on the Hermetic Alchemy Forum on 18 November 2013, as post #500.