Once we have produced the vehicle for the Stone, the next step is to ripen that white vehicle, and then imbibe it with its Ferment. Ripley continues at this point describing how to use the vehicle for the Stone to make the White Transmuting Stone, by addition of oil of Silver as the 'white' ferment. I'm not going to comment on that part of the process because it is essentially the same as the process for making the Red Transmuting Stone … which is the summit of the Work. So I am going to progress from here right on to that final process, the Red Transmuting Stone.

The next stage in the work is described in Ripley's 20th Chapter, which he titles: “The Digestion of the Red Stone”.

“Then take out the white Stone and divide it in to two, and know the true weight of each half, the one half reserve to the white work, the other half put into the Glass, and seal it up again with Hermes Seal, and then remove the Glass into a Cinerition which is somewhat a hotter Fire, and let it stand there likewise unremoved in that digestion, until it become Red, and of a Purple Colour, so have you the red Stone also ready to be fermented.”

The 'white stone' he speaks of is our aforementioned vehicle of the Stone. He divides it in two, and takes one half to continue to the red work. He heats it in an ash bath (cinerition), until that white vehicle changes colour to red.

In Christio-alchemical symbolism this stage is referred to as 'the Pelican in her piety'. The standard icon of this symbol is a white Pelican (the white vehicle) pecking its own breast and shedding its blood to feed its young. This provides a graphic picture of what happens at this point, where the white stone 'bleeds' and a red oil drips out, eventually turning the entire mass completely red. 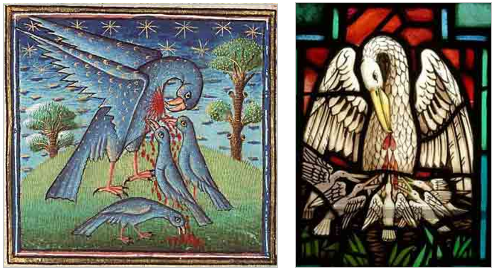 “Then likewise take Gold very purely, first purged from all other Metals that may be joyned with it, with ten parts of Antimony, and then dissolve it in our Mercury or Liquor Solutive, as before you did the Lune, and when it is perfectly dissolved the Liquor will be Citrine; then in like manner, rectifie from it again our Mercury or Liquor Solutive, and then Seal up the Oyl of Gold Ferment in a Chemia fit for it, and set it in Balneo to Putrefie, which likewise will become black, and must stand still unremoved in digestion, until it become white, which then remove into a stronger Fire without opening the Glass, and then keep it until it change Colours and become Citrine, which then is also Ferment of Ferments for the Red-work.”

Next we take 24 carat gold. Ripley describes an old method of purifying gold where it is fluxed with Antimony (known as cupellation), and the Antimony clings to the impurities and they together form a crust on the top of the molten gold, that can then be removed.

This oil is then closed in a chymia (a small bowl - long necked flask). This flask is then suspended in a water bath, to warm the oil (ferment of gold) to 30 degrees celsius (the heat of putrefaction). This oil then turns black (which is a sign of its putrefaction). It must stay in putrefaction until it reaches a white colour, which then place on a hotter fire until the citrine colour is reached again … and we know from both theory and practice that 3rd Order oils undergoing putrefaction change through various colours, which the old alchemists called both 'the rainbow' and 'the peacock's tail'. Ripley only hints at this concept, above.

Once the oil is now citrine again it is known as the 'ferment of ferments' … in other words, the most powerful of all transmuting agents.

“Then to the other half of the Stone before rubified, digested, and reserved for the Red-work, put so much of the foresaid Gold Ferment as may contain the 4th part of the said Stone, and then fix them as you did the white-Stone, under Fire in a fixatory Vessel which will be then very well done in two or three days.”

The reddened (rubified) vehicle of the Stone is now imbibed with this Ferment equal in volume to a quarter the size of the reddened Stone. Then together this reddened stone and its Ferment are digested until the two become one. That is, until once you heat the Stone the Ferment nor any other substance separates from it … because they are all 'fixt', that is, solidified, together.

This essay was first published on the Hermetic Alchemy Forum on 30 December 2013, as post #558.